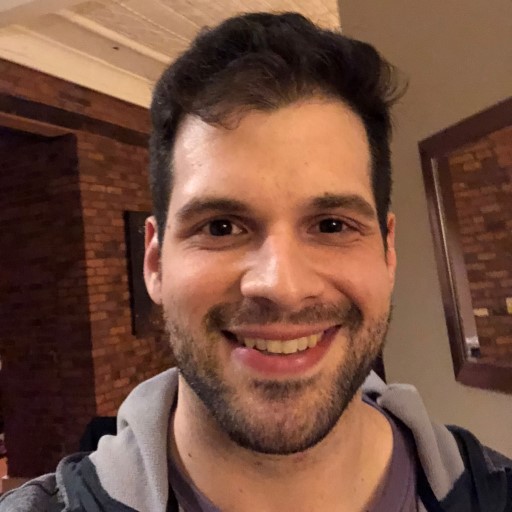 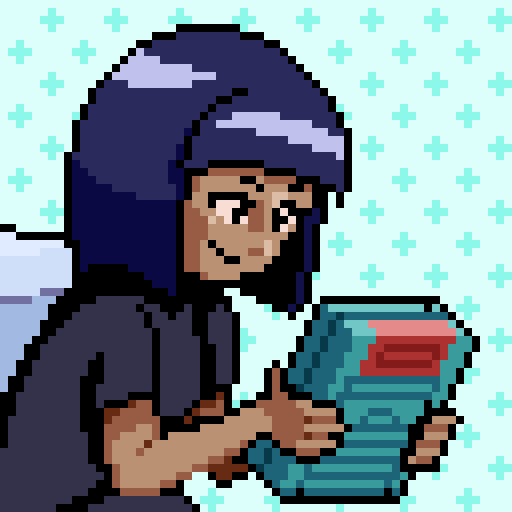 I’m Jordan Ajlouni! I’m a Game Systems Designer and Unity Developer. I’ve been in games for over 10 years now. My biggest release was I was a combat designer and lead designer on DS Volition’s Agents of Mayhem and Agents of Mayhem DLC respectively. I’m currently a game systems designer at Digimancy Entertainment on an unannounced AA project.

I am Rachelle Viola. I also go by “dr!p” or “Drip” on the internet. I work as a freelance Pixel Artist and Graphic Designer. A lot of my work was involved in the Chiptune community as a live Visualist. I played shows throughout the United States and Canada alongside notable Chiptune musicians.

My involvement in Game Development is still quite new. I started freelancing for the Playdate developers at the end of 2019. Wanting to get more involved, I found a MeetUp event page for IGDA Ann Arbor while poking around the internet. I met Jordan at one of the meetings, and a few game jams later Oil Leak Games was created.

I was enchanted by video games my whole childhood. I played the original Zelda on my cousin’s NES before I could read. As far as making games, I was drawn to it from the natural overlap of all my skillsets. I was fortunate enough to go to game development camps in my formative years and from there I took every programming class I could and dove deep into creative writing. You pair that with my love video games growing up and I was all in. I went to MSU for game development and pursued it every chance I got.

I’ve always loved games since I was a kid. Throughout college, I viewed games as more interactive pieces of art. I was more attracted to games with stunning visuals and meaning behind it such as Katamari Damacy and Journey. I made a few minor games for my classes, and that really got me interested in the whole process.

The Chiptune community also attracts a lot of people in Game Development. So my long time involvement with the community connected me with developers looking for an artist.

My list is unsurprising for game developers. Zelda Ocarina of Time and Resident Evil 4 are at the top of my list for varied reasons that include nostalgia and design. To this day I still daydream about the first moments you walk out into Hyrule field or pick apart the clever crowd control mechanics in RE4.

I’ve played Magic the Gathering consistently my whole life and it helped me appreciate and internalize Systems Design which I turned into my career. The modularity of the cards really intrigued me. The fact that the cards could be radically different and have different abilities and rules could come together to make an incredibly dynamic and evolving game experience was really exciting to me.

Lastly, I played D&D weekly in highschool. I came to the realization young that it was nearly the perfect game, not because of depth or mechanics but it’s adaptability to make the ideal experience for the people playing it. That was a huge lesson for me in game development. You don’t make the game for you or for the game’s sake. You make it for the player’s experience.

Oh man. So so so many. Kirby Super Star for the SNES and Kirby Crystal Shards for the N64 were my go to as a kid. The variety of abilities and figuring out the combinations were my favorite parts of the game play. Plus those games are so a e s t h e t i c. As I grew older, I was really drawn to Okami, Psychonauts, Odin Sphere, Parappa the Rapper, and Katamari Damacy for their art styles. Then in my 20s I got really into the Bioshock and Portal series and their philosophical ideas behind them. Nowadays, I have a strong appreciation for indie games with a well rounded elements of sick visuals, dope soundtracks, and fun/challenging game play like Hotline Miami, Fez, Night in the Woods, and VirtuaVerse.

Agents of Mayhem will always be close to my heart. It was my first AAA job and my first full time design job. The team was also incredibly talented and inspiring and community was tight knit. I worked as a combat designer designing kits for the playable characters (think Overwatch or League of Legends style kits). It’s the job that made me realize I liked systems design and combat design and I made life long friendships with my teammates.

I also really enjoy working on games for our company, Oil Leak Games. Rachelle and I have enough overlap of our style of weird that we can just roll with some absurd ideas that manage to come together in fun ways. Our newest game, Mechanical MainFrame, fell into place really nicely all while we got to joke about our nostalgia for early 2000’s technology.

I think The Church of Cheesus Crisp: An All You Can Pray Buffet was my favorite to work on. It contained elements of things I really enjoy: lots of references to food, fun and cute characters, poking fun at the Catholic Church, and short bursts of different types of game play. Both Jordan and I grew up Catholic, so the whole process of coming up with ideas involved a lot of jokes about the culture. Also, it was the first project where we brought along my friend, Corey Chappell also known as snesei, to do music and sound effects. It felt our first well-rounded project because we each were able to focus what we do best.

Ohhh good question! And I’ll try not to give too many answers. For the US, I think we need to transition to more remote work and decentralizing our gaming hubs away from LA, Austin, and Seattle. Long term, I feel like unionizing and fighting for worker’s rights is necessary. By ensuring game developers have more job and income stability and work/life balance, they’ll be able to do better work and we won’t lose as much experience and talent to burn out. Increasing the amount of remote workers helps too because someone in the Midwest, like myself, have a lower cost of living and familial support that I wouldn’t have at the same job in LA.

Folded into that is we need to get better at making games. And I mean on the workflow/production side of things. Crunch happens because of mismanagement and fundamentally wrong expectations and the only ones who pay for it are the developers on the lowest rung.

As someone who has only been part of the game development community for a short time so far, I don’t think I can speak too much about the inner workings of the community. However, from a consumer perspective, I think one issue is the weird sense of entitlement gamers have towards their favorite video game or developer. I understand, as consumers, we want the things that we paid for, but if a product doesn’t meet all of the over-hyped expectations, gamers can react very passionately. Instead of accepting the game for what it is, they complain a lot.

Tune in for GLGX 2021 to hear more from Jordan, Rachelle and our other presenters! We will be live from the 18th to the 21st of February on Twitch.